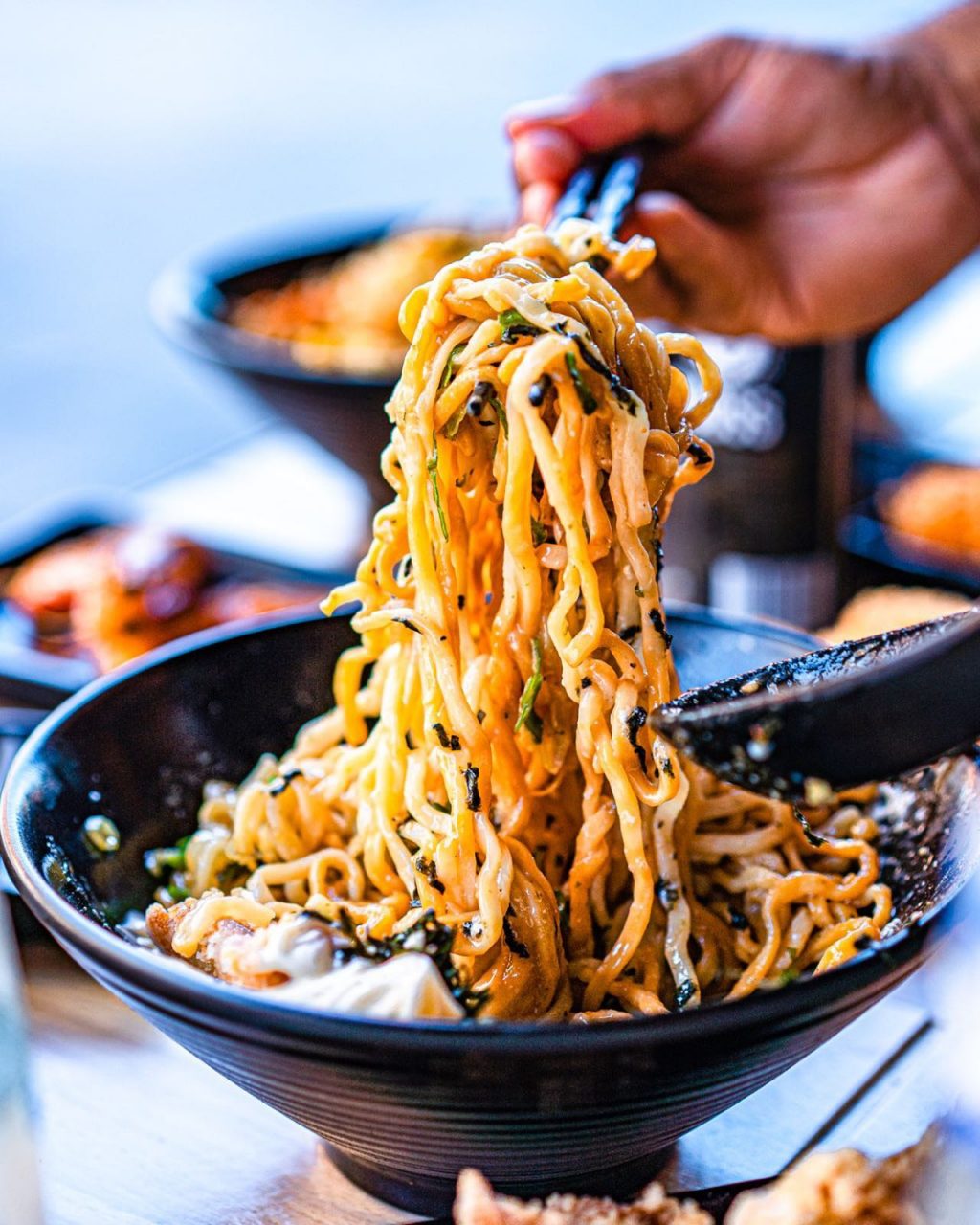 The interesting scene I can see here in Australia is foodies love to eat ramen soup while drinking cocktails or wines – it looks very cool actually, people get dressed up for the night out and eat ramen with a cocktail which is never seen in Japan. My eyes home in on that bowl of ramen though, especially the noodles, which absorb all the soup and it looks completely different. This is not how Japanese people eat ramen soup – we have been told that eating ramen soup should be as quick as possible. Why? Three reasons from different culture, firstly, it’s how hard the texture of ramen noodles is the most important thing as we have choices from super very hard “harigane”(7-15 seconds to cook), very hard “barikata”(15-20 sec), hard “katamen”(20-45 sec), usual “hutsuu”(45-70 sec), soft “yawarakame”(70-100 sec) and very soft “zundare” (100-150 sec). The chef manages the exact seconds to cook ramen noodles to serve you the noodles at their best. As Tonkotsu Hakata style of ramen is common in Australia, generally speaking, the barikata or katamen would go well for thick soup like tonkotsu. Secondly, how thick ramen noodles are is another key factor to talk about ramen. For Tonkotsu ramen, usually, very thin and dry noodles are well matched in rich Tonkotsu soup which means the noodles absorb the soup very quickly. Lastly, Japanese people eat hot food while it is still hot, we don’t appreciate waiting to cool it down to eat. So eating ramen soup as quickly as possible makes sense, doesn’t it!

Back in 1957, in Musashi Sakai, Tokyo, there was a ramen shop called Chin Chin Tei, the owner of Chin Chin Tei made soup-less ramen called Mazesoba. This is the first Mazesoba in Japan.

It’s actually a totally different dish.  Mazesoba is a part of the ramen family. The key is noodles.

Mazesoba goes well with moist, chewy and thick noodles. Mazesoba has sauce at the bottom of the bowl under noodles when you’re served. So, you can mix all together from the bottom. Try the taste as they are first, then enjoy changing taste with vinegar and ra-yu chilli oil which are on the table. The noodles are moist themselves and there is no soup which means you can enjoy an original taste as long as you want.

And there is an interesting way to finish up with rice called Oimeshi instead of Kaedama. You can add rice after eating all noodles to mix with leftover sauce to enjoy your way to the end of this meal. 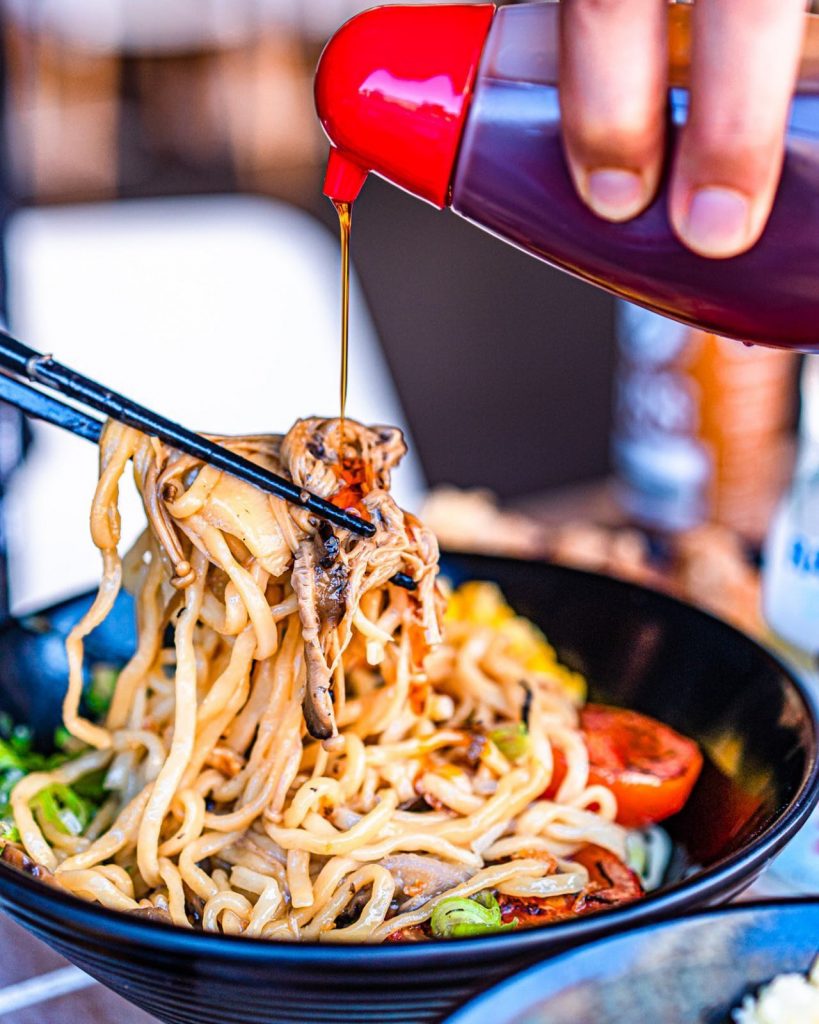 I met the owner, Michelle, of IIKO Mazesoba in Darling Square which is the very first Mazesoba restaurant in Australia. I was surprised to see her as a ramen chef. I met probably more than 50 ramen chefs in both Japan and Australia, but I’ve never met anyone like her. She doesn’t look like a typical ramen chef for me and I was curious what made her open a Mazesoba shop in Sydney, Australia. She went to Japan to learn how to make ramen professionally and discovered the similarity from doughs in ramen and pastry when ramen noodles are made from scratch. She was a pastry chef after graduating from La Cordon Bleu in Australia, and used dough every day to make fresh pastry. She loves Japan, she loves ramen noodles and she can communicate with dough quite well.

Miyajima Ramen school in Osaka, Japan, the first established ramen school in Japan according to President Miyajima said, he taught her how to make ramen professionally. I interviewed Mr Miyajima over the phone, the principal of the ramen school. Mr Miyajima can’t forget the time when he met her for the first time. She learnt everything with huge passion and she was a very quick learner. Mr Miyajima came to Sydney to support her opening her first shop IIKO Mazesoba in last November and he also met all her staff and families. Her noodles are perfectly made for Mazesoba to use Australian flour to recreate authentic ramen noodle in her original way. Noodles for Mazesoba must have a bigger surface of noodles to stick with sauce to eat well balanced. Her noodles are perfectly soft with a chewy texture. “No one can make noodles like her”, Mr Miyajima said. 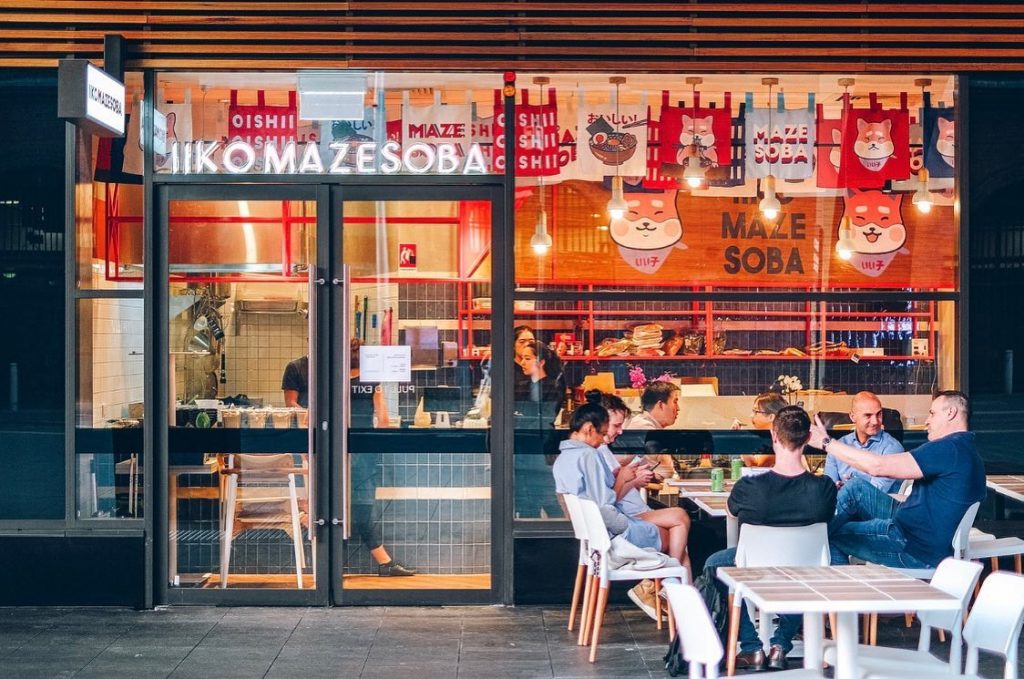 Michelle says she is excited to play around with flavour for homemade ramen noodles here. That’s why she bought a noodle making machine to have it at the store and making fresh noodles every day in front of her customers. Her challenges are to make something delicious and interesting which would give her customers something new to enjoy.

Since she opened IIKO Mazesoba last November, she made cocoa noodles on Valentine’s Day, which her customers enjoyed eating. So, she’s thinking about matcha or something interesting next.  Follow IIKO Mazesoba @Instagram and don’t miss her limited flavoured noodles.

Vegan Mazesoba menu is  also available here as they don’t use eggs for making fresh noodles!

Book IIKO Mazesoba from here : You can have Washoku Lovers Booking benefit – A free of Mazesoba snack