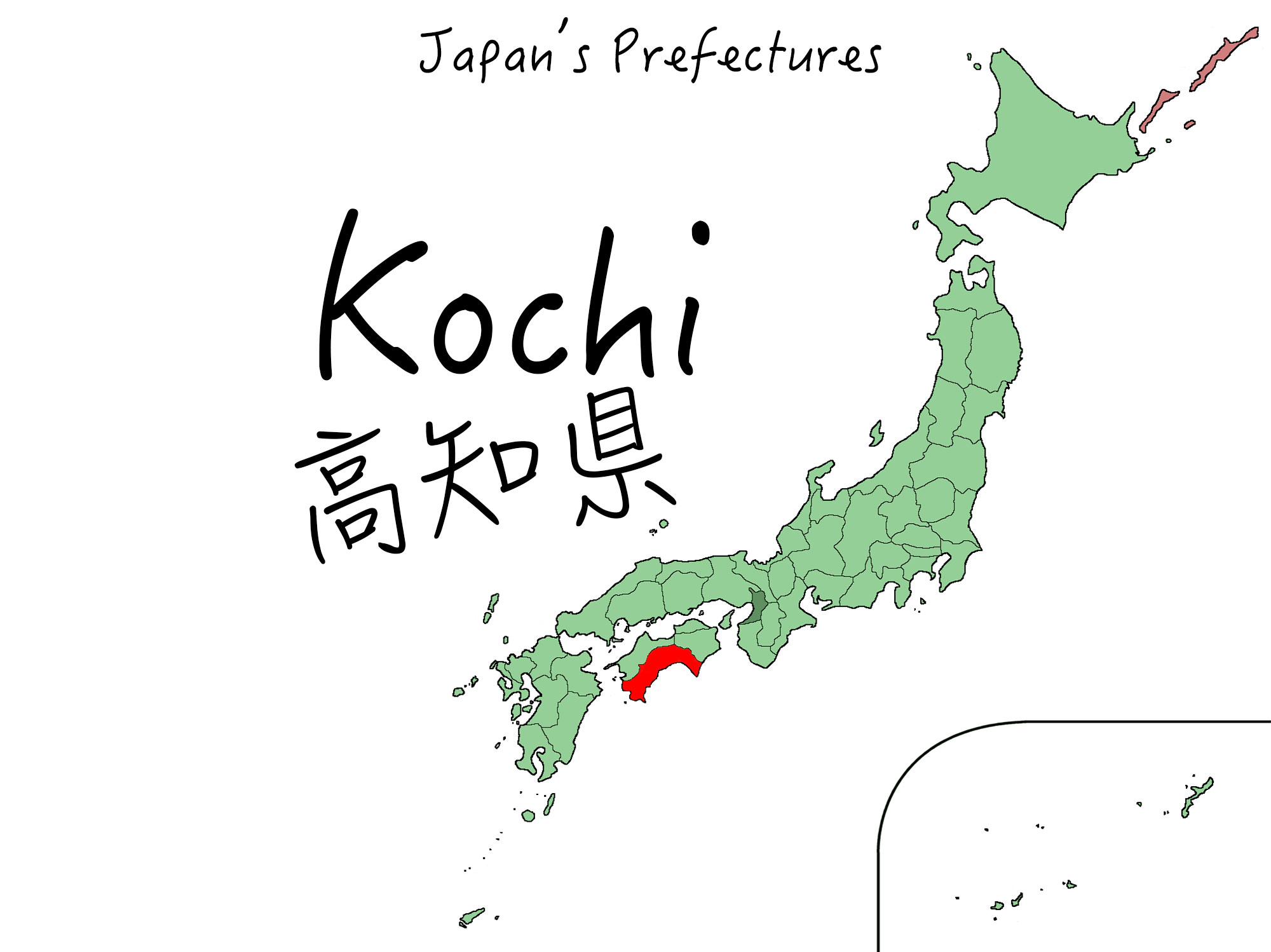 Kochi Prefecture is well known for having a lot of mountains, and a lot of rivers. Bordering Ehime Prefecture on Shikoku Island, it’s home to one of the 12 original Japanese castles, Kochi Castle, Mount Godaisan which had a planet named after it, and the Anpanman museum!

Ryori means cuisine, and is usually used to describe the local “special occasion” food, but in Kochi Prefecture, sawachi ryori is actually a casual meal – despite how fancy the presentation is. Various foods are arranged on a large, colourful circular plate and it’s a dish that never comes out exactly the same. Rather than being a formal dining experience, sawachi ryori is a relaxed meals that friends share and catch up over. It’s said that this dish represents the friendliness of Kochi Prefecture.

This is one of the foods often found on a sawachi ryori plate, but you can also have it on its own. In English it’s called “seared bonito” or “seared skipjack tuna”. Straw from the rice harvest is also used in the cooking process, and the fish is seared so it’s cooked on the outside but still raw and juicy on the inside. Rather than being diced like most other tataki dishes, it’s sliced like sashimi. You can see katsuo no tataki in the top right of the photo above.

If you’ve ever thought about combining hotpot and ramen, then this is the dish you would come up with. A chicken shoyu (soy sauce) broth and thin noodles are the base of the ramen dish, topped with egg, fish sausage, and green onions (plus any other ingredients chefs want to add) and most importantly, served in a nabe hotpot bowl. Nabe are usually clay pots but can also be cast iron and are used to make hotpot in Japan. It’s unusual to serve other dishes in them, but Nabeyaki Ramen is one exception.

Kochi Prefecture has two cattle strains: Tosa Akaushi (Tosa City red cattle) and Okawamura (black cattle). The Tosa red cattle are very rare and make up only 0.1% of Japanese wagyu. It has a high red meat to fat ratio so it’s considered healthier than other wagyu cattle. Tosa city also produces a famous chicken breed so it’s a city with strong agriculture.

Every year in Novemeber Okawa village holds a festival for Okawamura cattle, where you can eat the beef cooked in all different ways and get to know the locals.

It’s thought that the name aisukurin came about when “ice cream” was misheard, but this sweet treat isn’t ice cream. It’s made from eggs, sugar, and skim milk powder. With a super low fat percentage, the dessert isn’t creamy, it’s more like shaved ice. It’s crunchy, light, and super refreshing on a hot Summer day.

Aisukurin used to be popular all over Japan but now it has a strong home base in Kochi Prefecture. The most common flavour is banana, but you can get almost any fruit as a flavour, as well as the well-loved matcha.