Tananbata (七夕) is held every year on July 7 (August 7 in regions that follow the lunar calendar) in Japan. It celebrates a story of love, and is often called the Star Festival. The origin of the festival comes from a folk tale of a boy and a girl who fall in love. Originally from China, the story was introduced to Japan during the Heian Period (From 794 to the year 1185). Each rendition of the story is slightly different, but it generally goes like this:

Orihime, a princess from the heavens, is a skilled weaver who works tirelessly at her craft. She works so hard that her father, the king of the skies, takes pity on her loneliness and decides to find her a partner. He decides on Hikoboshi, a cow herder, as a suitable partner since he also works tirelessly at his profession.

Orihime’s father thinks they’ll be a good match, but he doesn’t anticipate them falling so deeply in love that they can think of nothing else but each other. The deeper the pair falls in love, the more they start to neglect both weaving and the cows. Orihime’s father becomes angry at how the pair have changed and separates them, creating a great river in the sky to prevent them from meeting.

After this, both Orihime and Hikoboshi fall into depression, returning to their jobs but without the passion they had before. The pair longs for each other, never forgetting the love they had and finally Orihime’s father once again takes pity on her. He decides the pair may meet only once a year, on the night of Tanabata. 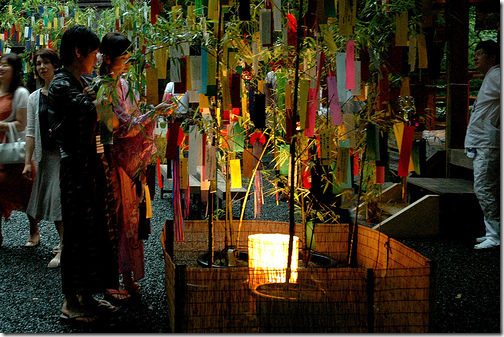 Orihime and Hikoboshi are also the Japanese names for the two stars Vega (the weaver) and Altair (the cow herder), which are on opposite sides of the Milky Way (Amanogawa天の川 ), the river Orihime’s father created. Other versions of the story have magpies which make a bridge over the Milky Way for the lovers to meet, and in some versions Orihime’s father is a little bit more selfish. It is said that if it rains or is cloudy on the night of Tanabata, Orihime and Hikoboshi cannot meet, so people will usually pray for good weather and give their wishes to the lovers.

One way of doing this, is to write your wish on a special piece of paper called tanzaku and then hang it from a bamboo tree. Other paper ornaments are also made and hung from bamboo trees. Large versions of traditional ornaments are hung in train stations, marketplaces, and department stores all around the country and everyone generally gets in the spirit of celebrating!

Here are some origami guides. Just click the one you want to make, and then from the page it sends you to, click the little yellow circle under the picture to view the instructions. You can also download printable tanzaku paper to write your wishes on from here.

Of course there are major festivals held all around Japan, but two that are particularly famous are in Sendai and Hiratsuka. They are renowned for their decorations!