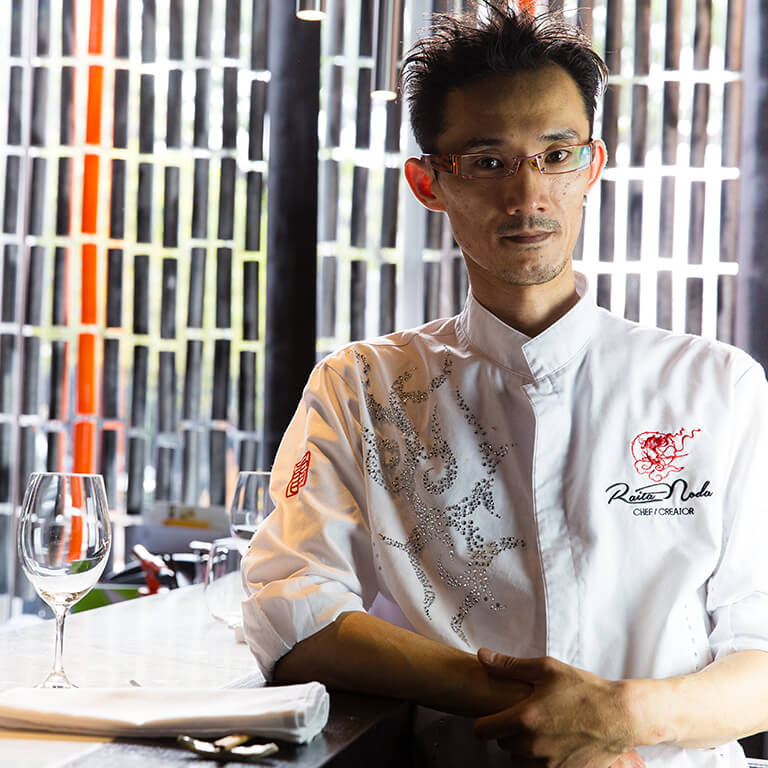 Chef Raita is originally from Roppongi, in Tokyo. He moved to Australia when he was 15 years old because his parents decided to resettle from Japan to Australia. He’s been living in Australia ever since and works with his son and apprentice, Momotaro Noda at his newly opened restaurant: Raita Noda Chef’s Kitchen.

From Executive Chef at Ocean Room, Chef Raita opened this intimate restaurant in Surry Hills that seats a maximum of 8 people. This is where Washoku Lovers met him.

Washoku Lovers: How long have you been cooking professionally?
Chef Raita: 22 years

Washoku Lovers: How long have you been living in Australia?
Chef Raita: 26 years in August this year

Washoku Lovers: Where did you train to cook “Washoku”?
Chef Raita: I did my apprenticeship at Matsukaze Japanese restaurant. It is still in the same location, but is now called Azuma. I was lucky to work for ANA hotel afterwards, it is now better known as the Shangri-la hotel in the Rocks. Back then, the Japanese economy was doing well, and many big firms were supporting Japanese Chefs to come and work overseas. They sent cutlery, crockery… Matsukaze’s backbone was Panasonic.

When I turned 26, I decided to open my restaurant called Rise in Darlinghurst. Luckily quite a few clients came to offer their support. 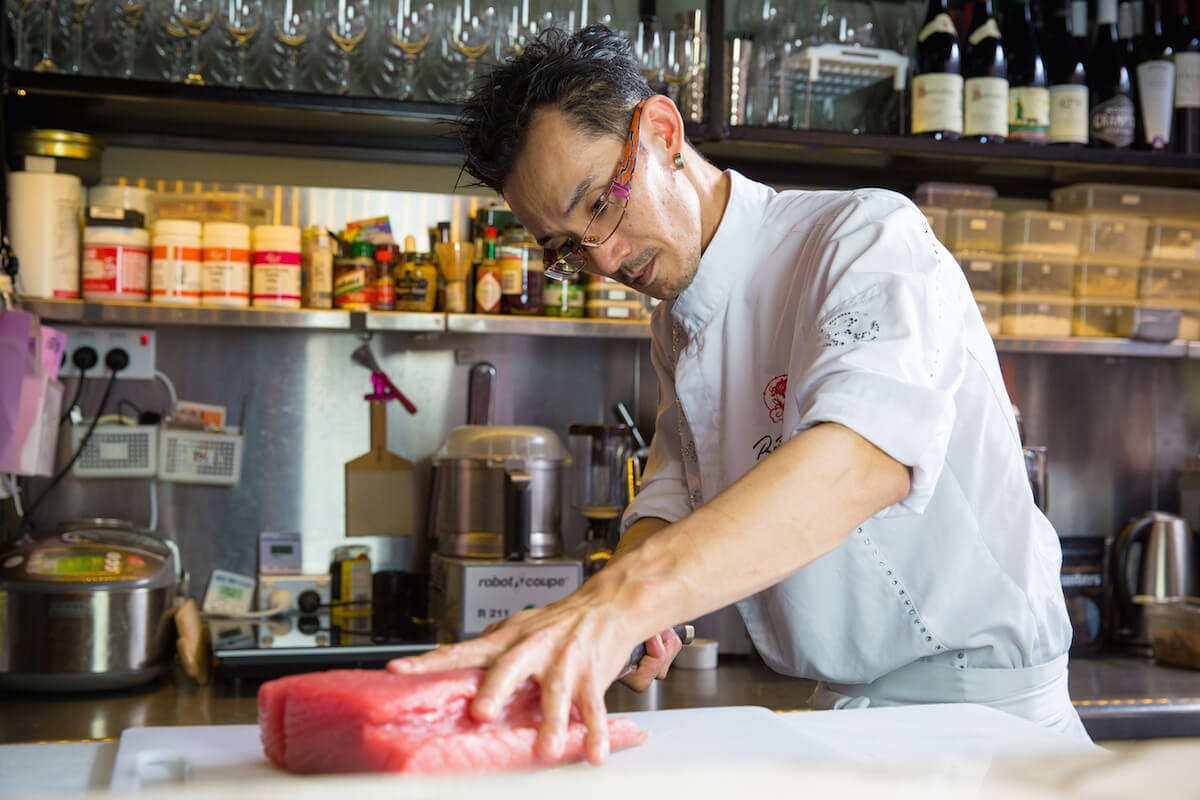 WL: What do you think about cooking Washoku out of Japan?
Chef Raita: It’s quite challenging, because Japanese cuisine is based on domestic ingredients. Japan has 4 different seasons, and depending on the season, fish, meat and vegetables are changing. Japanese cuisine is based on preserving the original flavour of each ingredient, as well as cooking food that matches the seasons, so for example, you’re supposed to change the plates and crockery.

WL: Is it hard to source ingredients here in Australia?
Chef Raita: Well, other countries like the US, France have less quarantine restrictions, and so they get their fish straight from the Tsukiji Fish Market who took a direct flight… So top restaurants in New York don’t use much of their own local produce. In Australia, it is the hardest thing for Japanese Chefs who learnt Japanese cooking in Japan because the products are different. I’m not saying the Australian products aren’t good, but the Japanese Fish Market culture is crazy! If I order several pieces of fish this size (Chef Raita shows us a 15 cm fish filet), there will only be a difference of no more than 5mm between each piece. The logistic in Japan for the fish market is just perfect, so for Japanese Chefs who grew up in Japan and were used to this, moving to Australia is actually really difficult, they struggle. Here in Sydney, due to quarantine restrictions, you can’t rely on direct flights, so I’m quite fortunate to have been trained here in Australia as I’m used to prepare and cook Australian ingredients.

WL: So what’s your secret?
Chef Raita: I built relationships to have an advantage. At the beginning, it wasn’t that easy. I was only 26 when I opened my first restaurant, and producers and fishermen, they didn’t care about me, they wouldn’t sell to me at first… but I kept on coming back, even if I couldn’t get any fish. I brought couple of packs of cigarettes and cup of coffees and over time, we got closer and closer, and some of those people have now become big players in the tuna industry. Last time I asked for a donation for a charity, and I wanted just a piece of loin, they sent 80kg of blue fin tuna. That piece was meant to travel to Japan, but they stopped it and said “Raita, this one’s for you!” We have a very good relationship now, so they support me, and that’s why I could decide to open a restaurant this size. I used to have an advantage at Ocean Room due to the quantities I was buying, they were huge… but my suppliers still keep on sending me the best produce, even very tiny portions. It’s not just for the business, he’s also assisting Japanese Food Culture in Australia.

WL: That’s heartwarming! Speaking of Japanese Food culture, do you have a favourite Japanese dish you enjoy cooking and eating?
Chef Raita: I don’t know… (turning towards his son who is preparing for service) What do I like? Ah! chicken karaage.

WL: Do you think this is Washoku?
Chef Raita: Yes yes it is! I think it is totally different to the Chinese style one… I like both, but the Japanese one reminds me of food I had at home. Washoku, for me, is homely food.

WL: What do you think about mixing Washoku with other food cultures?
Chef Raita: I think it’s great! I’m using that, and doing that quite often. When I was in Ocean Room, I had three sous-chefs. One Australian, two Japanese, but one was French trained, and the other was Italian trained. After them, I had another sous-chef who’s cuisine was based on French training, and we inspired each other a lot. Part of the techniques they used was very suitable to Japanese cuisine. We Chef, always learn way to improve, I always think about what’s the best way to cook and prepare, what’s the newest trend. Japanese cuisine can grow from this.

WL: Is there another chef that you most admire?
Chef Raita:: There was that one guy who was in Australia but moved to the states, slightly older than me. He was the exec chef of the Seven Restaurant, a 2 or 3-hat French restaurant that was on Bridge street. Chinese and Singaporean invested a huge amount of money into that restaurant, and Bill Clinton ate there. There were two exec chefs, one’s name was Nori and the other was Haru (Formerly chef at Blancharu, now Chef at ramen Ikkyu). Nori started his career in Chicago, and moved to Australia as Tetsuya’s sous-chef. After resigning from Tetsuya’s, he went to Seven restaurant. The restaurant closed, and he moved to the states as an Exec Chef at the Mandarin Oriental. He fell for a woman who had 50% of her body covered in tattoos!! He’s seriously crazy, and as he was passionate about coffee, he moved onto sell coffee beans, and then another woman came, and he’s now opened a ramen shop in Chicago. Anyway, he’s one of the most genius Chef I’ve ever met. He really enjoys cooking, I love his spirit because whatever he cooks, it must, has to be, and is always perfect. Trying to achieve perfection for each dish that one cooks, that’s what I admire the most about him. He inspires me a lot.

WL: Any advice you would give to someone wanting to become a Chef
Chef Raita: Don’t be a chef. It’s a tough job. My son wants to become a Chef, I don’t know why (laughs)!